Club members Eveline Foubert and Steve Montebello gave us a write up about their trip to North Wales earlier this year, where they attended the British Mountaineering Council (BMC) biannual Summer Climbing Meet.

It all started when Simon, the president of the MCC posted about the BMC trad meet in North Wales. Immediately I saw the opportunity, having never placed a single bit of protection: I took this as the perfect opportunity to learn traditional climbing. Traditional climbing, or trad climbing, is where as you climb, you place various bits of protection in cracks, holes and other imperfections in the rock to protect a fall. Which I will later discovery is an artform, but before the meet, it was all a theoretical practice.

Both of us had never been trad climbing, and only sport climbed. We would be representing the Malta Climbing Club at the BMC trad meet.

After all was planned we landed in Manchester, bag full of climbing gear and head full of excitement. We were taken to Llanberis Pass, North Wales. Here the landscape broke into high mountain passes, valleys and gorges. We were informed later that night that the climbing here is diverse, rock types ranges from rhyolite, quartzite, slate and limestone, and the climbing is diverse too, from scrambling to ice climbing. 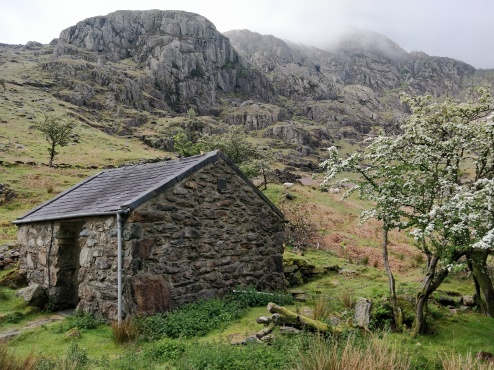 This was our hut, an offshoot of the climbers club, comforts included a warm bunk bed, a living room jammed pack with climbing gear and enough tea to inebriate an English man. 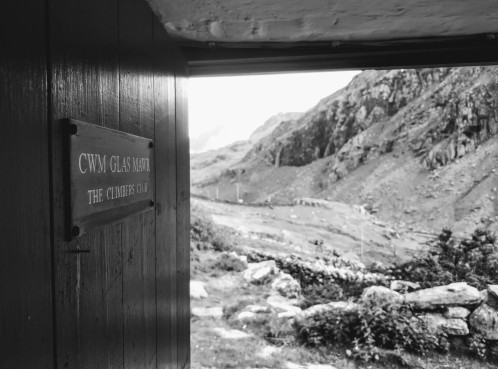 This was our hut, an offshoot of the climbers club, comforts included a warm bunk bed, a living room jammed pack with climbing gear and enough tea to inebriate an English man.

The location is nestled between a cradle of peaks – Crib Goch, Garnedd Ugain and Yr Wyddfa (Snowdon) – known as the horseshoe. Here you can find plenty of information about the area, the geology and the crags in the pass. The opening one liner explains the destination perfectly “The Llanberis Pass is a tremendous destination, a place so steeped in climbing tradition and mythology that it has become a cornerstone of Welsh climbing folklore, and for many climbers is one of the first BIG destinations to be visited away from their local venues.” (source https://www.ukclimbing.com/articles/destinations/llanberis_pass-2508) 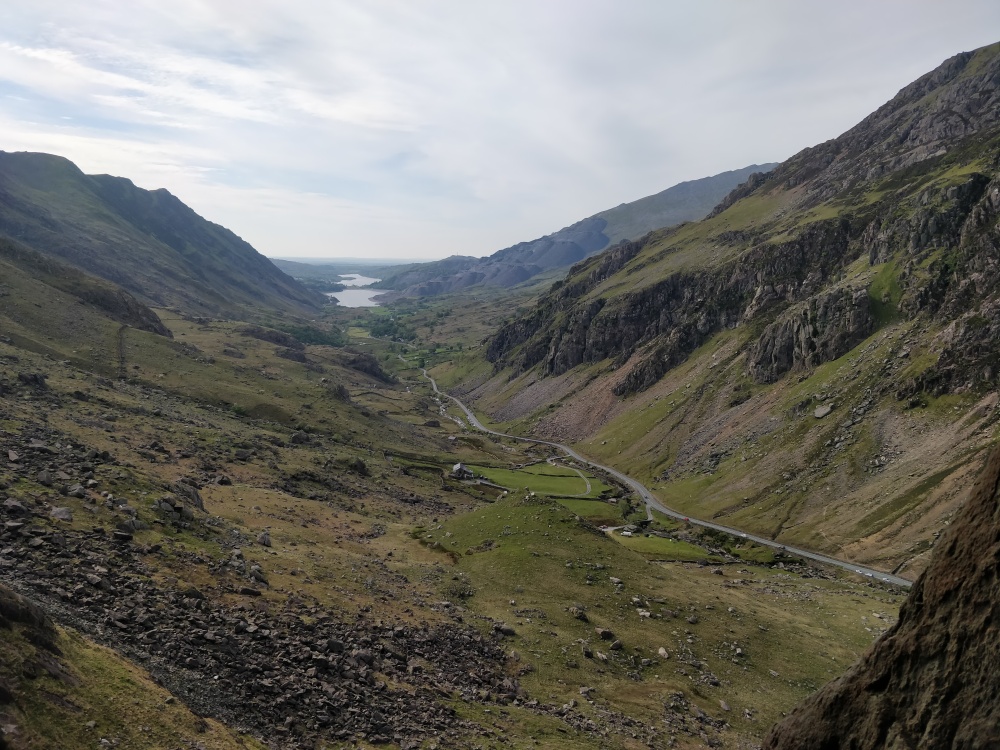 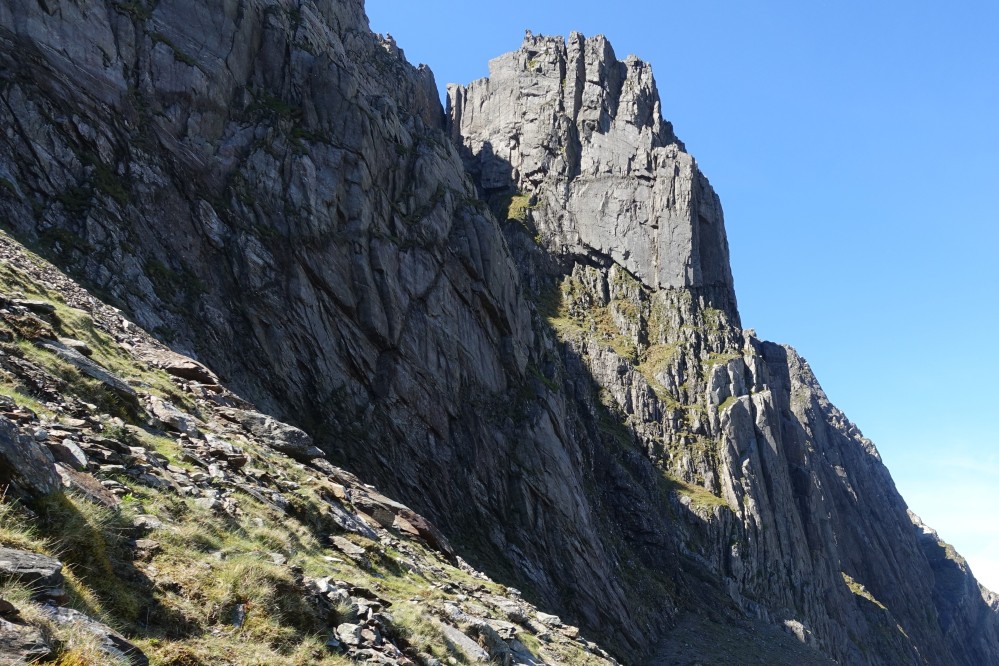 Sport climbers learn how to place a nut

On the first day of climbing, we were treated to a large breakfast (as we were treated for the rest of the trip), and were introduced to our hosts. Steve’s host was a local named George, they bonded over climbing and bikepacking – two of my favourite adventure sport. Eveline’s host was Hillary, who enthusiastically started reminiscing about her climbs with Simon, who came to meet a few years before. We hesitated to explain to them that we had no experience trad climbing, but they were not phased at all.

They told us that climbers from all grades and experiences come to join the meet. They were more than happy to show us the literal ropes and get us interested in this traditional way of climbing. We have to admit, they succeeded. Although it was hard to leave the comfort (and security) of bolts behind, we both loved this way of climbing and the mindset that comes with it.

The first day, they took us to Tremadog, a great crag for learning how to place protection and easy routes to focus on the placements. 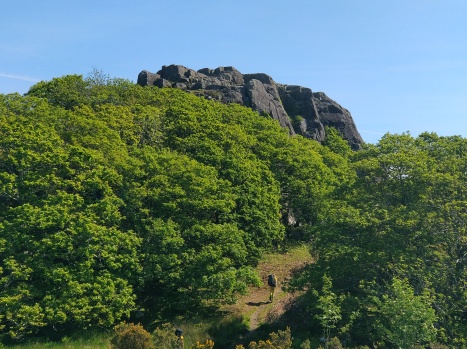 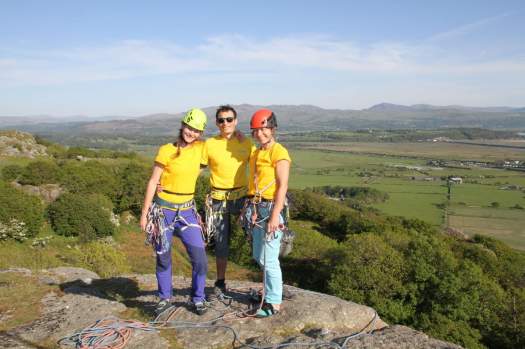 We were starting to get a feel for it, and the sensation of fear started to subside as we understood what the type of climbing was like. Planning out protection as you climb, reading the route and find the path of least resistance – all of it started to make sense.

Some notable Pitches for us were:

The Concrete Chimney HVS 5a – Wen Zawn is a beautiful dramatic location at the sea cliffs. This route’s highlight was chimney climbing with sensational views, next to one of Gogarth’s most famous routes, A Dream of White Horses (HVS 5a). As seen on the picture above, the place was so popular, we ended up being stuck in a trad traffic jam for a while. Luckily we had breathtaking views! (Eveline)

Nea  VS 4b – A classic route at Clogwyn y Grochan, famous for its first ascent in 1941 by Nea Morin, a British rock climber who was a member of the female only Pinnacle Club. Not the hardest or most exciting climb, but as a female trad climber, an absolute must do! (Eveline)

Cenotaph Corner E1 5c  – a famed bookcase corner at Dinas Cromlech – I was informed by my host for the day, Geoff – the hut custodian – that is a three star classic climb where it is easy to fall into the trap of placing lots of protection in the beginning since it follows a crack in the 90 degree corner. Both turned out to be true, however a well placed knee-bar lock just before the crux brought a needed rest. The 40+ meters of beautiful climbing definitely earned its classic status. (Steve & Eveline) 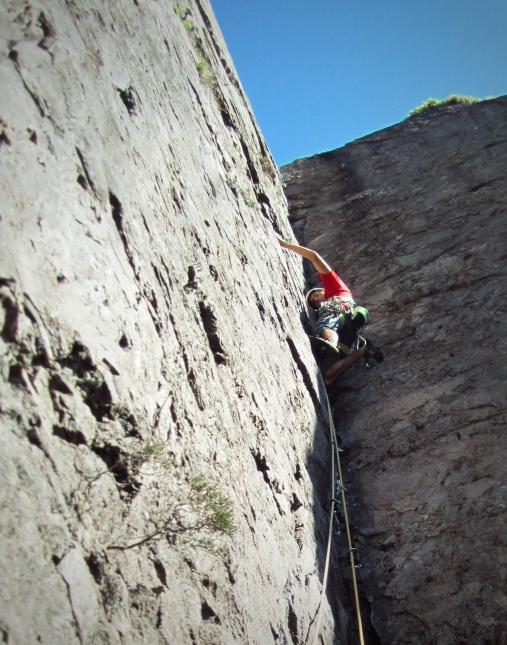 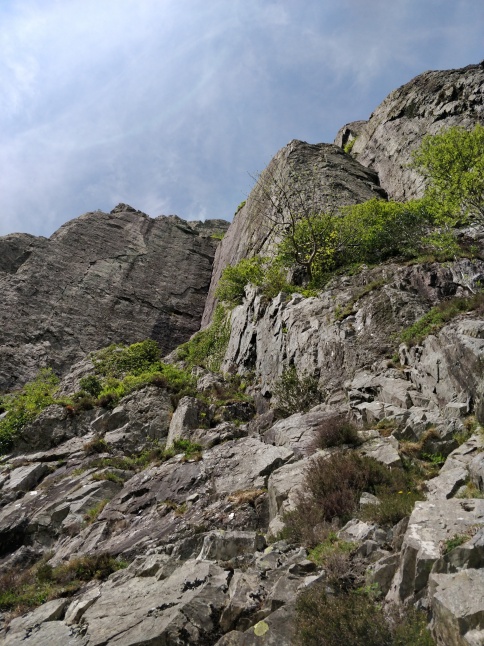 Cemetery Gates E1 5b – Also on the Dinas Cromlech, second pitch of the day and second E1, climbed in one 50m pitch. At the end of it I had over 10 slings on spikes for protection, at the top end of the pitch I was taking apart quickdraws to sling spikes. (Steve)

The Strand E2 5b – Gogarth – on the second day climbing with my third host, my british namesake Steve. He quickly directed me to this 55m three star pitch at Gogarth North Stack and Main Cliff. The climb follows a ever-steepening main crack with beautiful views over the Irish Sea. This time I learnt to plan out my protection, saving gear for the top moves. (Steve) 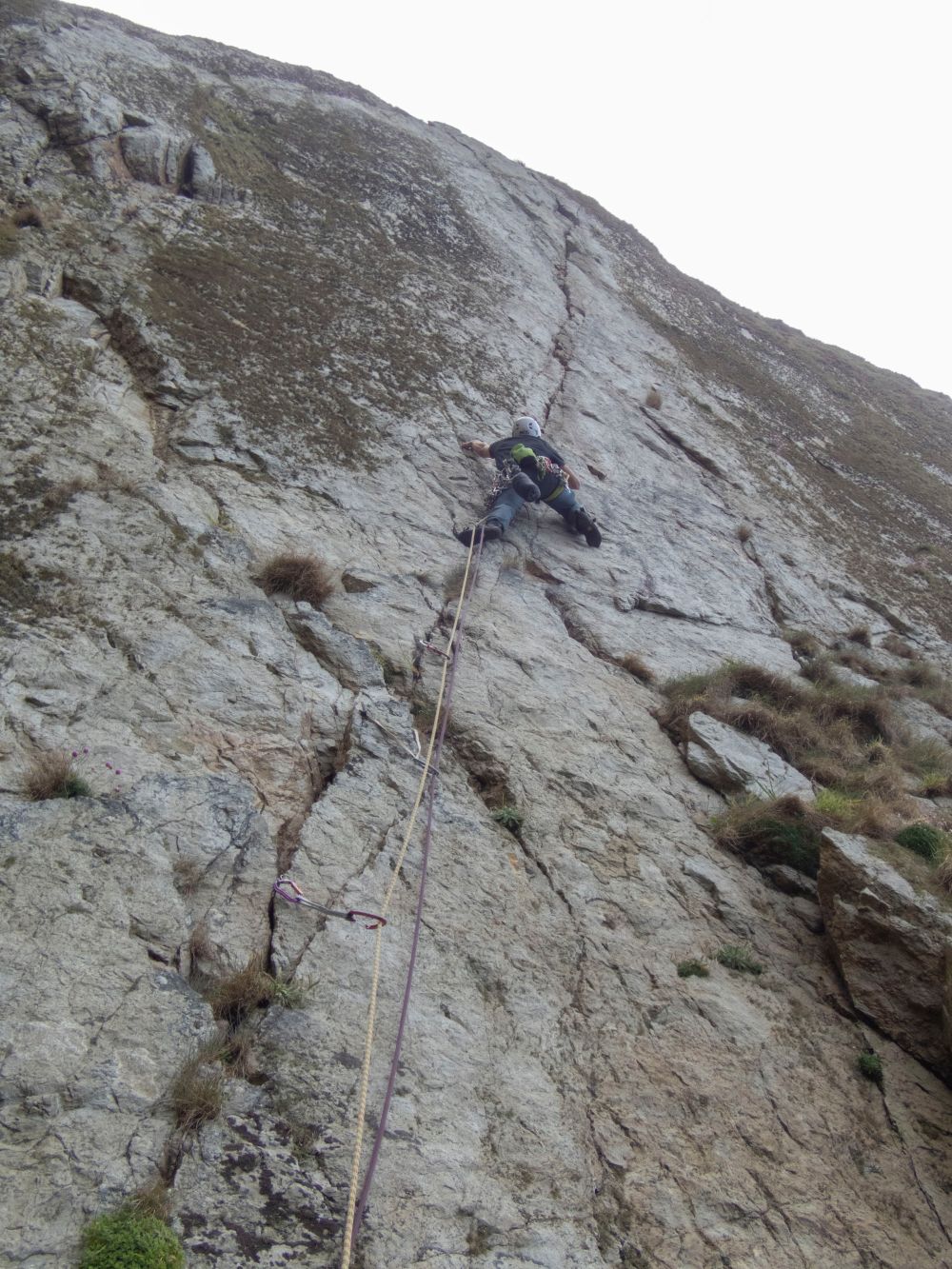 Bass Hunter (E4 6a) | 70m and 5 pitches of sea cliff climbing, after a hairy descent you are greeted with an ever so slightly overhanging sea cliff. Steve was the rope gun for these pitches, leading them all with pure confidence and deliberation. (Steve) 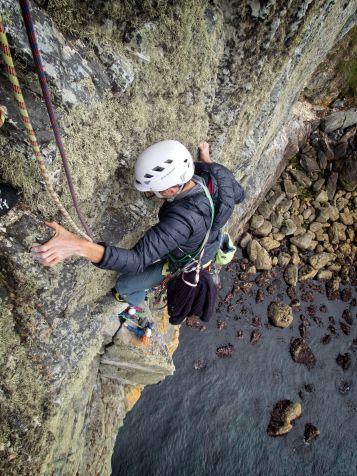 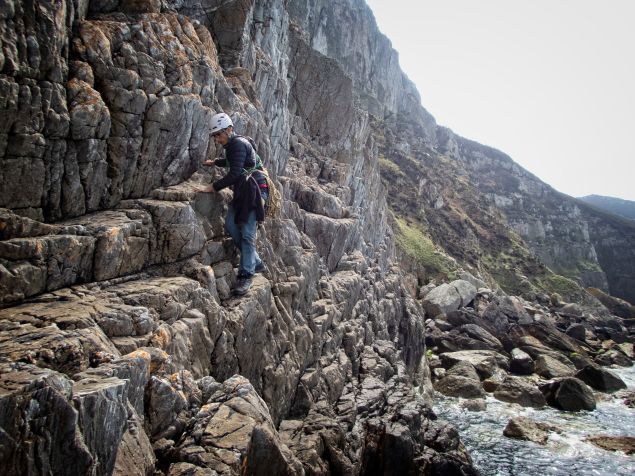 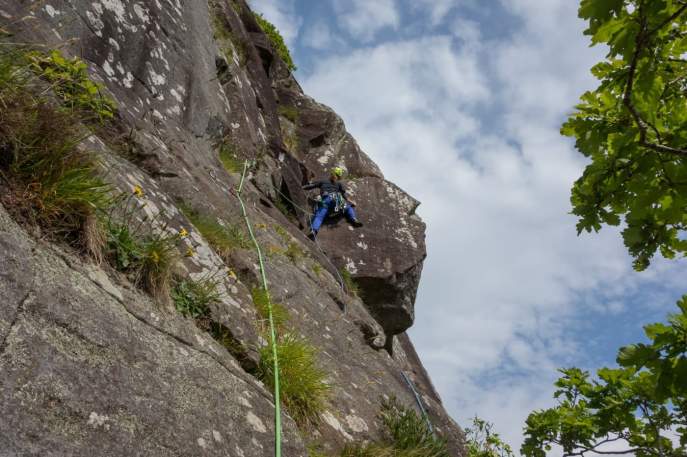 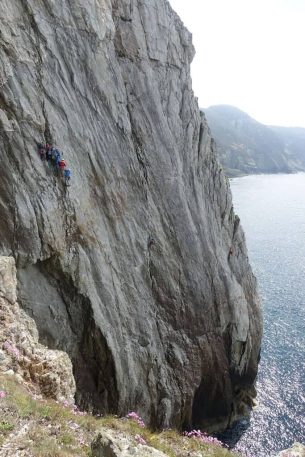 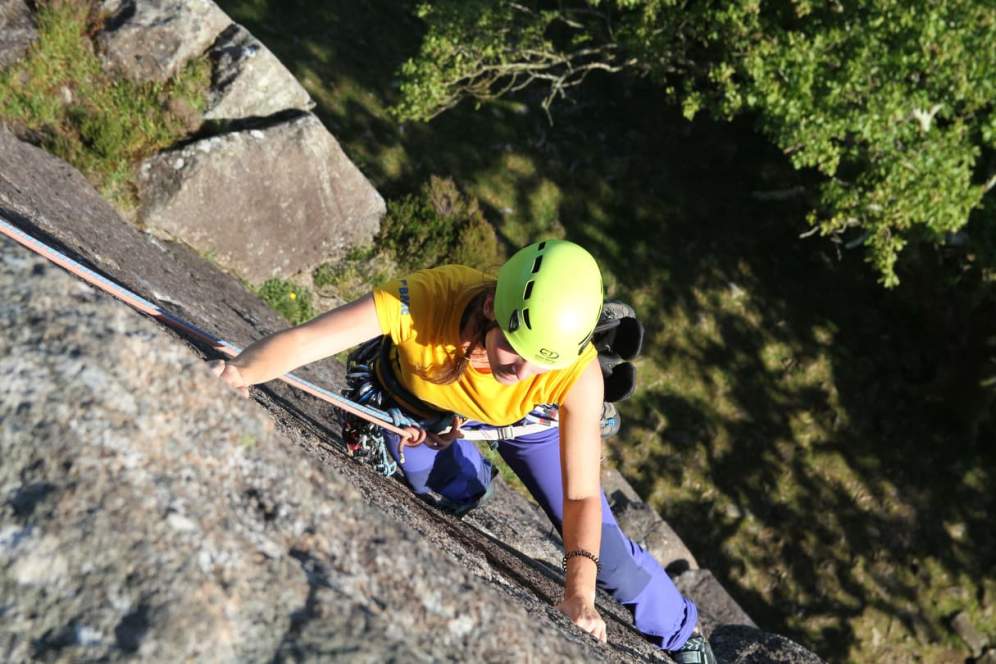 A final mention has to go to the wonderful internationals and hosts at the meet. 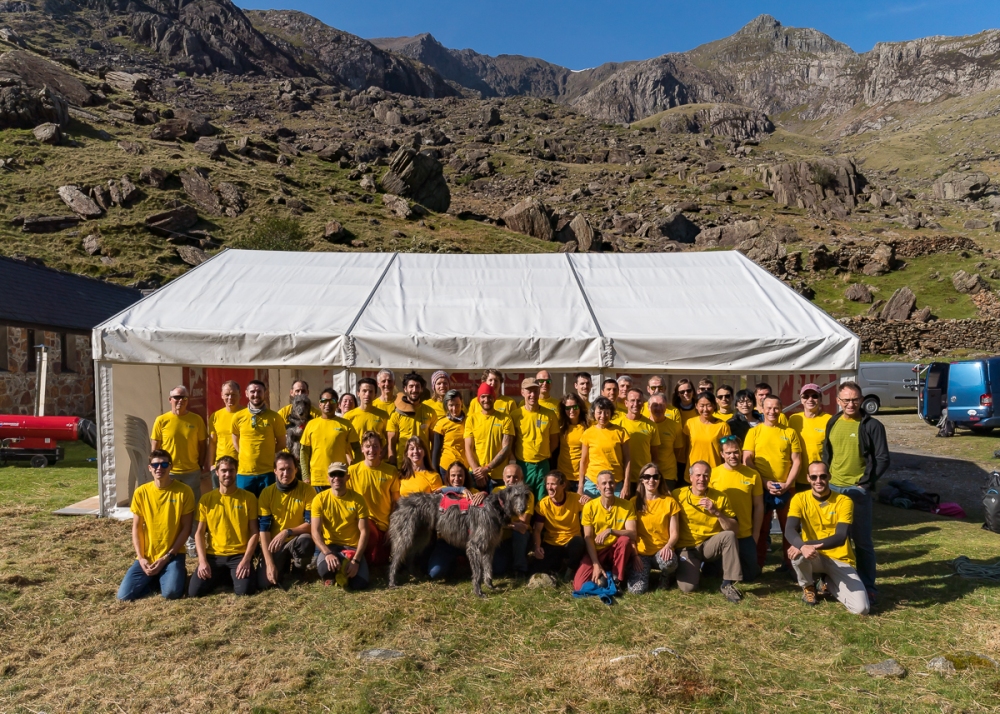 Hillary: As my first host, Hillary was most welcoming. She introduced me to trad, thought me all the necessary skills and convinced me trad climbing is not as scary as I thought it would be.

Georgia: Georgia didn’t let me pass on the famous Cenotaph Corner, taking the lead enthusiastically and showing me this beautiful adventurous route.

John: John guided me for three days through the remote sights of Wales, taking me on the beautiful routes of Tremadog, Gogarth and Holyhead including well-deserved daily beer and ice-cream.

George: George was my first host, a fellow climber and bikepacker! He explained trad climbing to us for the first couple of days, explaining everything we needed to know, from how to place protection, how to build an anchor, how to deal with climbing with two ropes and many intricites of trad climbing.

Geoff: The custodian of the climber’s hut, Geoff knew the area, landscape and pitches like the back of his hand. It was lovely climbing with him, and sharing the experience and conversation scrambling the Snowdonia Horseshoe.

Steve: Steve was very adamant on making sure that I get a taste of true british trad climbing. We climbed the less visited Craig Y Forwen, a limestone crag and at the famed Gogarth, getting a taste of Welsh sea cliff climbing.

Big thanks also go to the organisers of the BMC, including Becky and James, who made sure every one of the guests had the time of their lives!

BMC write up on the Meet – https://www.thebmc.co.uk/bmc-international-summer-climbing-meet-2019