SCROLL DOWN FOR UPDATE.

“The Crossing” is arguably THE most impressive route at Ghar Lapsi.  A project of John Moulding, a talented (and outspoken) British climber  who in the 80s and early 90s put up some of the hardest routes  in Malta and Gozo at the time such as “Chasin the Dream” and “Ghost Dancing” at Mgarr Ix-Xini.  But his “piece de resistance” was The Crossing..a line through the largest roof of the largest cave at Ghar Lapsi.  He bolted the route and returned to Malta to finally lead it in November 1999.  Despite many attempts by many climbers the route had, until today, remained unrepeated.  In fact, during a recent short visit to Malta, the editor of Italian climbing magazine “Pareti” tried it and found it to be formidable.  Unfortunately he didn’t have time to work on the route but confirmed its high quality.

Then I got a message a few minutes ago from Malta’s top climber Jeffrey Camilleri.  He said ” Today in 15 minutes both me and Rael (Saez Candelas) repeated …. “The Crossing” benchmark 8a in 15 minutes, after about 15 years of no unrepeated ascents…”

Jeff was clearly delighted and relieved too as he has over the years put a lot of work into discovering the route and working out the moves.  He clearly felt that “it was about time” it was done.   He confirmed that today conditions were good and the vibe was good.  A new “trick” was discovered which seems to have been the key to success this time.  The hard work has finally paid off!

Commenting on the grade, both Jeff and Rael confirmed F8a .

FOLLOWING PUBLICATION OF THE ABOVE ARTICLE I HAVE BEEN CONTACTED BY STEVIE HASTON WHO HAS IN FACT CONFIRMED THAT HE HAS HIMSELF RECENTLY REPEATED THE CROSSING ON THE 1ST JANUARY THIS YEAR AND WRITTEN ABOUT IT ON HIS BLOG HERE.  SO CONGRATS TO STEVIE ARE DEFINITELY IN ORDER AND APOLOGIES TO HIM FOR THE WRONG INFORMATION.

HAVING SAID THAT I THINK ITS STILL GREAT THAT JEFF AND RAEL’S INVESTMENT OF TIME AND ENERGY  HAVE FINALLY BEEN REWARDED WITH CLEAN ASCENTS OF THIS REMARKABLE ROUTE!  MAY THE DRIVE AND DETERMINATION OF ALL THREE SET AN EXAMPLE TO ALL LOCAL CLIMBERS TO CONTINUE TO STRIVE TOWARDS THEIR GOALS HOWEVER DISTANT THEY MAY SEEM.

Pics of Jeff on the route: 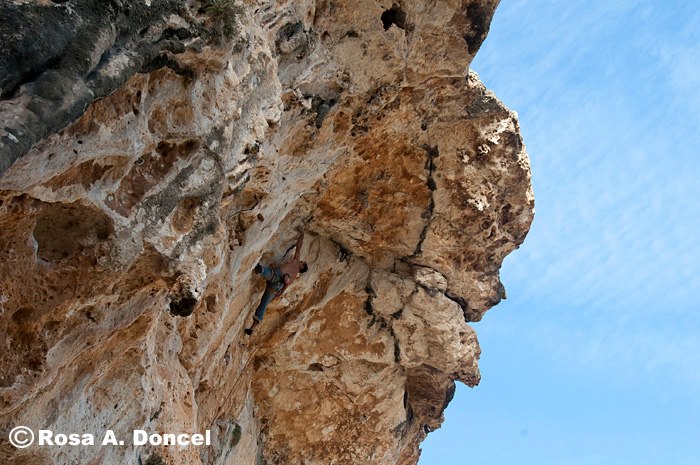 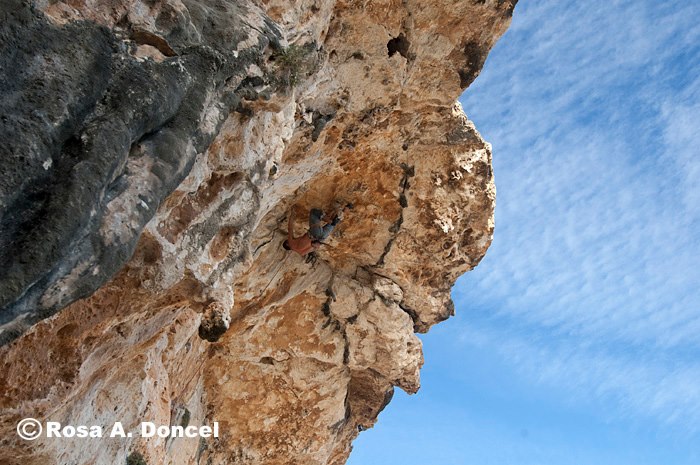